A scientific study of Saint John the Baptist’s relic

I support the project >>

Notre Dame D’Amiens Cathedrale celebrated its 800th birthday in 2020. For this event, all necessary authorizations have been granted to carry out a multidisciplinary analysis of St John Baptist’s relic, one the most reverred relic of christianity, which has been attracting crowds of people to the Cathedral since 1206, so much so that, when the Cathedral burnt down, a new cathedral was built bigger and larger, to welcome the pilgrimages.

A crowdfunding campaign to finance the analysis of the relic

A crowdfunding campaign was launched to finance the analysis, the final report as well the exhibition planned for 2022.

The analysis will be performed with the greatest care, with no risk of damage to the relic.

The new imaging, biology, dating and genetics technologies will be used to try and pinpoint the origin and the type of elements that make up the reliquary: the tray, the cranium and the crystal cover. The analysis will refine the conclusions drawn from the only study ever performed on the relic, dating back 60 years.

I support the project! >>

Origin of the project

John the Baptist was also called The Prophet because he anounced Jesus’ coming and he baptized Jesus in Jourdain river. After he rebuked king Antipas for marrying his sister-in-law Hérodiade, John the Baptist was put in jail and then be-headed. Legend has it that his head was presented on a silver tray to Hérodiade, who plunged a knife into it.

His body was buried and it is unclear what happened with his remains. In fact, several churches claim to possess bones from his head or body.

In 1206, Walon de Sarton, from Picquigny, brings back Saint John Baptist’s head from the Crusades, and hands it over to the Bishop.

Right then, pilgrims flocked to the town of Amiens to the relic. When the cathedral burnt down in 1218, a much bigger cathedral was rebuilt, big enough to welcome the crowds of pilgrims. 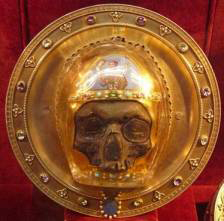 The relic is the front part of a human skull, with the jaw missing. Shortly after the head was brought to Amiens, in the XIII century, a silver tray decorated with jewels and a crystal globe was manufactured to protect the relic.

Saint John Baptist’s head and the crystal globe are the original ones. The silver tray was replaced in the XV century by a gold silver which was destroyed or robbed during the revolution; in the 18th century.

The existing tray is a silver tray manufactured by the Parisian goldsmith Placide Poussielgue Rusant, in the 19th century.

In 1959, an analysis of the relic was performed (mainly radiographic) and it was also compared with a jaw relic from Verdun. The analysis concluded that Saint John the Baptist relic belonged to a man, who died in his thirties and who lived between 2500 BC and 1000 AD, and who came from Palestine.

How will the funds be used?

The funds will be used to secure the resources and equipment necessary to analyse the relic with the utmost care and no risk of degradation. They will also finance the production of the scientific report and the organisation of a conference or exhibition in 2022.

1. Detailed observation of the relic and its reliquary

Capture with as many details as possible the state of the relic and its reliquary. We will use various observation techniques (magnifying glasses, digital microscope) to detail the technical preparation of the relic. High definition photographs will be taken.

2. Morphological study of the cranium

CT-scan analysis in order to build the bone structure with 3D printing and stereolithography.

MRI exam, with a “chemical” analysis performed by spectroscopy.

If safe to do so, tiny samples will be taken for additional laboratory exams: